To be a fly on the wall in a pawn shop would be a fascinating thing! The items that have came through our store over the years have been nothing short of interesting. From signed Michael Jordan jerseys, a diamond about the size of a dime, to historical memorabilia that has been on earth dating back as far as the 1700‘s.. leaving it very difficult to narrow down our favorites!

We decided to share these top items with you guys by starting a mini series. Each week, a different employee will share their all time favorite item that has came through our store! We hope you guys enjoy!!

My first would be the 5 carat cushion cut diamond! It was absolutely GORGEOUS! We were told it was worth around $100k! Funny back story on this: We were told by a local jewelry shop that we wouldn’t get more than $30k for the diamond. Luckily for us, we didn’t take the first bite. We ended up getting more than two times what was offered and just in time to make a payment towards the hefty $140k tax bill on our store.

My second is the 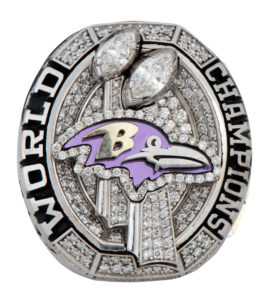 2012 Baltimore Ravens Super Bowl Ring. It actually went to auction and sold for $36,000! This 10k white gold super bowl ring had 243 round-cut diamonds, two marquise diamonds that stood as the top of the Lombardi Trophies, and purple and gold enameling for accents. It was extremely heavy – weighing around 85 grams and took up quite a bit of room on my tiny finger. We were all pretty  awe struck looking at this ring!

Last but not least, anything with major historical value, in my opinion,  will always be interesting! A few years back we received 2 Nazi daggers. These were distributed in the 30’s to early 40’s. I was told that if the dagger looked to be unused – then it meant that it was held by a high ranking officer. One of the daggers had some heavy wear on the end whereas the other had minimal. The estimated worth of these ranged from $900 to $2000. My dad being the history buff in our family received these as a Christmas gift from myself and my Grandma. She actually got mad when she found out what I had picked out for him because she said mine was “better” than hers! So, I decided to let her give him one – the one worth more money, of course – so she could have the better gift! It was so funny! I can still hear her voice,

“Kara Beth! Now what am I going to get him?? How about you buy one and I’ll buy the other! Now which one is worth more?”

It truly is hard to narrow down the cool items. It’s not an every day occurrence, but when something unique comes in, we get pretty excited. You never know what part of history will walk through the door next!